This phenomenon is related to the concept of the "primary eye."

What is "Primary Eye"?

Under normal circumstances, external objects can be imaged independently in both eyes, and then the brain synthesizes the images of both eyes into one image, forming fused vision.

In this process, one eye will be in a dominant position regarding gaze or spatial perception, and the brain will preferentially accept what it sees. The brain habitually uses the imaging of this eye to analyze and locate objects, and this eye is the primary eye. The other eye, which is in a subordinate position, is the parafoveal eye. Generally speaking, the primary eye has a higher daily workload, and its prescription will be higher than that of the secondary eye.

Division of primary and secondary eye

We can use the cell phone multi-camera to analogize the division of labor between the primary and secondary eyes. Usually, the primary eye is responsible for observing details, similar to a telephoto lens, with higher resolution and more straightforwardness to distinguish details. On the other hand, the secondary eye is responsible for observing the background, similar to a wide-angle lens, and has a higher sensitivity to color.

How to distinguish the primary eye?

Some studies show that roughly 70% of people are right-eye primary, 29% are left-eye primary, and 1% are not distinguishable from the primary eye.

To find out your primary eye, you can do it in three simple steps.

Step1, Open your hands and overlap them, leaving a space between your palms.

Step2, Find a target object, which can be a pen or a computer. 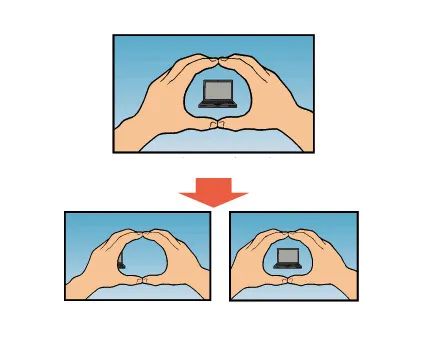 The reason for the emergence of the primary eye is partly genetic and partly related to eye habits. It is normal if the difference in prescription between the two eyes is within 150 degrees.